Layout of my prompt 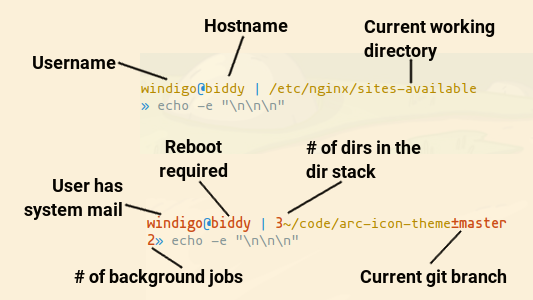 prompt for other users

Windigo -
Loved the episode. Very well articulated! I had one thought. When you want to run your prompt as another user (or, have other-user specific prompts), you don't need to do any symlinking, especially on a multi-user system.

For example, on servers I helped manage, I had .rootbashrc in my home directory, and after I did a sudo su - to get a root shell, I would then source /home/x1101/.rootbashrc to get _my_ root specific rc file.

Just some food for thought.

Quick follow up: Xoke was kind enough to remind me that I hadn't posted a link anywhere to my configurations. Here's the git repository:

x1101: That makes a lot more sense, especially on multi-user systems, since you wouldn't want to steamroll other users' rc files with your own. Thanks for the tip, man! :)

Thanks for doing this show. I enjoyed it a lot (even though I'm rather late listening to it).

I have done stuff to my prompts in the past, on Unix systems and on Linux, but have just not bothered in later years. I like the ideas you talk about here and may well be inspired to experiment some more.

Note to Verbose Commenters
If you can't fit everything you want to say in the comment below then you really should record a response show instead.

Note to Spammers
All comments are moderated. All links are checked by humans. We strip out all html. Feel free to record a show about yourself, or your industry, or any other topic we may find interesting. We also check shows for spam :).